Match-week six of the 2020/21 Arabian Gulf League delivered several stellar displays, at both ends of the table.

Sharjah’s grip on the nascent title fight strengthened after the international break in Friday’s heated summit clash against Al Nasr. A penalty double from Brazilian playmaker Igor Coronado was enough to secure the King’s 2-1 triumph, maintaining their hold on top spot and the division’s only 100-per-cent record.

Not even UFC superstar Conor McGregor’s surprise support could get over the hurt for sinking Al Wasl, who saw Salem Al Azizi sent off, when Togo striker Kodjo Fo-Doh Laba’s second-half penalty earned a 2-1 win for improving Al Ain. Fujairah shot away from the relegation zone with a consequential 1-0 success versus bottom-placed Hatta, Bani Yas’ sharp slide extended thanks to Chile forward Junior Fernandes’ brace in Ittihad Kalba’s 2-0 away victory and Al Dhafra snapped a three-match losing run in all competitions with the same scoreline against 13th-placed Khor Fakkan.

Here are Sport360°’s top picks and a talking point:

PLAYER OF THE WEEK 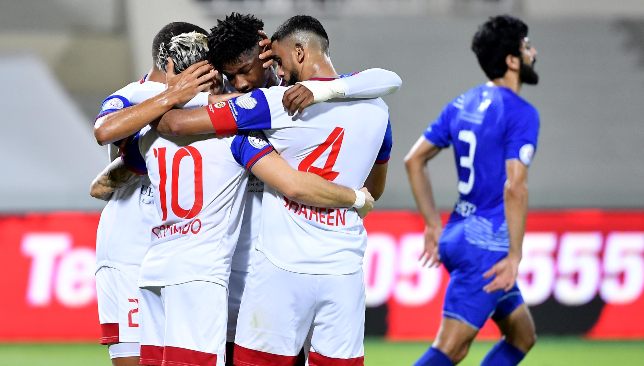 There can be no question about the identity of the AGL’s most-decisive player.

Coronado stepped up twice versus then second-placed Nasr from 12 yards and successfully converted to send Sharjah on their way to a sixth-successive win. The ex-Palermo creator used the same vehicle to dispatch Jazira before the international stoppage, while he’s only failed to notch in one league game this term.

He, truly, is the Middle East’s equivalent to Manchester United and Portugal superstar Bruno Fernandes. From the same flying spot-kick method, to his perfect technique and invaluable ability to influence proceedings.

GOAL OF THE WEEK

A goal which exemplified everything Marcel Keizer’s Ajax-infused Pride of Abu Dhabi are about.

The 17-pass move was started by the spritely UAE centre midfielder within his own half and finished by him with an accurate low finish into the bottom left corner of the stranded Majed Nasser’s goal. This was a football concert, each constituent part perfectly calibrated and each pass incisively chosen.

“We faced some criticism having too much possession with little outcome. Case closed tonight,” was the succinct description supplied by director of football Mads Davidsen after a fine result which sent his club fourth. When refined Jazira play with this purpose, no-one can lay a glove on them.

COACH OF THE WEEK

A sense of foreboding tailed the fixture.

Tufegdzic’s side boasted 80 more passes than – usually – possession heavy Hatta and two more attempts on target. This would be enough to record a first win of a campaign in which results have not always matched performances, while a grimmer fate awaited opposite number Christos Kontis…

The rookie Greek coach moved aside in June and was convinced to comeback in July. But a dispiriting spell reached its nadir at Fujairah Stadium, with the axe coming down in the immediate aftermath and ex-Partizan Belgrade boss Vladimir Vermezovic drafted in as replacement.

Hatta cannot be chastised for hitting the reset button – the laudable passing game Kontis installed in 2019/20 has degenerated in 2020/21. Recuperative action was required.

The question now is what impact this call will have in the AGL’s other boardrooms?

Ripple effects are not uncommon. October 2019 featured six sackings once Ittihad Kalba dispensed with Fabio Viviani and a steady stream of managerial changes flowed from October 14-December 2 in 2018.

Decisions in the next few weeks could define the rest of 2020/21 for a number of nervous outfits. Al Ain already appear validated for retaining Pedro Emanuel despite a worst start in 13 years, while there can be few realistic complaints about Hatta’s alternative choice.